"All troops will debark for ground assault."

The addition of General Veers gives Imperial players another Commander option. His low points cost and support-oriented abilities offer a stark contrast to the likes of Darth Vader. 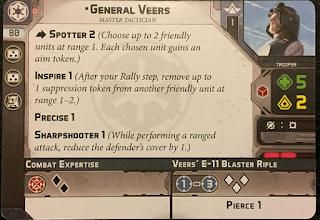 At just 80 points, General Veers is the least expensive Commander currently available.
He has a wound threshold of 5 and his courage value is 2. It takes at least 2 suppression tokens to suppress Veers, and at least 4 suppression tokens before he and any friendly units nearby will panic.
Thanks to his red defense die he has a 50% chance to block incoming damage.
Like most trooper units he is Speed 2.

General Veers is able to use Veers' E-11 Blaster Rifle to attack at range 1-3 with 3 white dice. Since he converts offensive surges to crits, this averages 1.125 damage (including 0.75 crits.)
When attacking in melee, his Combat Expertise attack of 2 black dice averages 1.25 damage (includes 0.5 crits.)
Sharpshooter 1 improves his attacks against units in cover, and with Precise 1, Veers can use aim tokens to re-roll up to 3 dice. Spotter 2 lets him hand out an aim token to up to 1 friendly units at range 1 (one of these units can be Veers himself.) Inspire 1 lets him remove a single suppression token from a friendly unit at range 1-2 (but not from himself, as it has to be "another" friendly unit.)

Above is the probability distribution for Veers' attacks: Combat Expertise in melee, Veers' E-11 Blaster Rifle, and his special attack when using the Maximum Firepower Command Card.
Most of the time Veers will probably be using his own E-11 Blaster Rifle. Though it can do up to 3 damage, unreliable white dice make it an unlikely result (~5.3% chance.) The Most Probable Result is 1 damage at nearly a 44% chance. Don't be too surprised when it misses entirely; a ~24.4% chance for all blanks means about 1 in every 4 rolls is a complete whiff. This weapon does have Pierce 1, so when you do roll damage it's more likely to stick.
When in melee Veers can do up to 2 damage (~39.1% chance), but the Most Probable Result is 1 damage about 46.9% of the time. You only have to worry about missing completely about 14.1% of the time. This would appear to yield more consistent damage than Veers' E-11, but since his melee attack doesn't have Pierce 1, you should probably avoiding getting into a melee unless you really want to avoid a nasty ranged attack.
Maximum Firepower is pretty powerful, rolling 3 or 4 damage over 92% of the time. It is discussed further in the Command Cards section.

To get a better sense of a unit's survivability, I like to use Effective Health Points (or EHP.) This refers to the average amount of damage one would expect to roll in order to defeat a given unit. Calculating General Veers' Effective Health Points is pretty straight forward: a wound threshold of 5 and a red defense die gives an EHP of 10. On average a standard unit of 4 Rebel Troopers will take Veers down in 5 attacks (ignoring things like aim tokens, dodge tokens, or cover) while 4 Stormtroopers typically get the job done in 7 attacks.
Unlike Vader, Veers doesn't have any keyword abilities to buff his defenses, so you will have to rely on careful positioning and upgrade cards to keep him alive.

Veers has room for up to 2 Command upgrades and 1 Gear upgrade. You might want to consider the following upgrades:

Commanding Presence (10 pts) extends your command range to range 4, granting a radius that can cover over half the battlefield. Unfortunately, your trooper units still need to be at range 1-3 to benefit from your Commander's Courage value, and units need to be even closer to benefit from Inspire and Spotter. And of course, if you're worried about units like 74-Z Speeder Bikes getting too far away from your Commander you can always use Long-Range Comlink instead.
However, given Veers' relative fragility, this could actually be useful for keeping him out of range of enemy threats yet still able to issue orders to your front line or far flank. This card could also be more useful if you happen to be playing with the optional "Grand Army" rules.

Esteemed Leader (5 pts) can help you keep Veers around much longer by using your Corps units at range 1 as bodyguards to soak up incoming damage. You should strongly consider this if Veers is the only Commander in your list, if you want to play aggressively with him, or even if you just want to guarantee using one of his Command Cards later in the game.
If you want to use this card you should make certain that you have plenty of Corps troopers in your list so you can sacrifice a few without seriously diminishing your ability to play the objective. And remember to keep at least 1 Corps trooper unit next to Veers whenever he is threatened by an enemy unit.

Environmental Gear (3 pts) lets you move through difficult terrain without slowing down. Similar to Grappling Hooks, just how useful it is depends on what terrain you are using; however it is more broadly useful than Grappling Hooks. For only 3 points, it could well be worth it on Veers so he can keep pace with the units you want him to be supporting. After all, Spotter is not much use if he isn't close enough to his subordinates or he has to spend both his actions on movement.

General Veers' Role in Your Army

As with other Commanders, you will use General Veers to issue orders and to keep your trooper units from panicking. However, unlike Darth Vader who is best when taking matters into his own hands, Veers excels at improving your other units.

While Veers himself has Precise 1, Sharpshooter 1, and Pierce 1, giving him a good chance to push some damage through, I believe his best offensive keyword is Spotter 2. Though it requires an action to use, it significantly improves the action economy of 1 or 2 other units at range 1 of Veers. In the right situation, this can be a huge boost. For example, a squad of Stormtroopers with an exhausted HH-12 could use their 2 actions to recover and shoot, yet still get up to 3 re-rolls. Or a unit with a large dice pool, like an AT-ST, could get an aim token from Veers, then take the aim action itself to get a second aim token, and then make an attack during which it can re-roll up to 4 dice. Just remember that Veers needs to be at range 1 of the unit(s) you want to support in this way. (One more thing to note is that Veers counts as a friendly unit at range 1 of himself; he can give an aim token to himself and thus has almost no reason to ever take a normal aim action.)

Veers can also support trooper units with his Inspire 1 keyword, removing a suppression token from another friendly unit at range 1-2. Not only does this help prevent units from panicking, but in the right circumstances he can keep them from losing an action due to suppression. Best of all, this automatically happens after the Rally step, so Veers doesn't have to spend any actions.

As with Vader, positioning Veers is very important- but for very different reasons. Instead of trying to get into the action quickly to engage enemies in melee and deny ground, Veers needs to stay close to the units that he wants to actively support, yet avoid exposing himself to too much enemy fire. As long as he is around, clever use of Veers' keywords and Command Cards assure that your forces stay in the fight longer and get more things done.

General Veers has 3 unique Command Cards that only he can use. Though their effects are less impressive than Vader's (Veers is only 80 points after all), a well crafted list can make good use of them.

Maximum Firepower
1 pip, General Veers
At the end of General Veers' activation, he may perform an attack using the following weapon: Range 4 and beyond, 4 red dice, Impact 2, Immune: Deflect
Veers' 1 pip card gives you a good chance to win priority and a rather powerful extra attack at the end of Veers' activation. It averages 3.5 damage (including 1 crit) and only has a 1 in 4096 chance to roll only blanks. However, since you can only issue an order to Veers himself, you are best off making sure he is in a good position to use that extra attack; this means acquiring line-of-sight to a target no closer than range 4. Impact 2 and Immune: Deflect make it extra effective against units with Armor or lightsaber wielders like Darth Vader and Luke. Remember that Sharpshooter 1 also applies to this attack, and you can use any aim tokens you might have during it too.
This special attack is not an attack action, so you can use 1 of Veers' actions to make a normal attack as well. In theory, you could even use both attacks against the same target. To do so you would have to attack a target just at the far edge of range 3 with Veers' E-11 Blaster Rifle and then move from range 3 to range 4 before making his Maximum Firepower special attack.
Since you are using a high priority card but can only issue orders to Veers, I believe this card is best used to try and finish off a wounded unit, though you could also try to soften up and suppress a particularly threatening trooper unit.

Evasive Maneuvers
2 pips, 2 vehicles
When a friendly vehicle unit is issued an order, it gains 1 dodge token. Friendly vehicle units can spend dodge tokens to cancel crit results.
Here is an excellent card to use when you have 1 or 2 vehicle units in a precarious position. Not only does it give these vehicle units a dodge token at the start of the round, it makes those dodge tokens and any other dodge tokens they might use better by allowing them to cancel crits. This is really helpful since crits can't be cancelled by an AT-ST's Armor or a Speeder Bike's Cover 1; it practically guarantees damage reduction.
Of course, since Evasive Maneuvers only lets you issue orders to vehicles, you need to actually bring some in your list to get any use out of it.

Imperial Discipline
3 pips, General Veers and 2 units
When a friendly unit is issued an order, it may recover.
On its face, Imperial Discipline may appear rather uninspiring, but being able to recover can bring a unit from full-on panic back into fighting shape. If you are playing the Hostile Environment condition, or are facing an army that dishes out a lot of suppression, Imperial Discipline will be your friend. If you enter the Command Phase and any of your units has sizable collection of suppression tokens, it's an ideal time to play this card to shrug it all off.
Even if you aren't facing a plague of suppression tokens, if you have powerful exhaustible upgrades then this card can still be very handy. For instance, a unit of Stormtroopers with an HH-12 embedded in it would love to be able to aim before attacking, but often they have to take the recover action instead to use their powerful Impact weapon. T-7 Ion Snowtroopers, an AT-ST with General Weiss, and even Darth Vader equipped with various Force upgrades can all benefit greatly from a free recover action at the top of the round.
Whether by removing suppression or refreshing upgrades, Imperial Discipline can seriously improve your action economy in the mid- or late-game, and can be just the thing your army needs to push toward victory.

With a low cost and abilities and Command Cards that benefit both troopers and vehicles, General Veers is an ideal "combined arms" Commander.

Change Log
4/5/2018: added mention that Maximum Firepower requires LOS to the intended target, per the suggestion of jbiondo of the FFG Community Forums
5/10/2018: added Environmental Gear to the Upgrades section
Posted by John at 9:57 AM