One of the largest and most expensive units in Legion, the powerful AT-ST towers above common infantry. 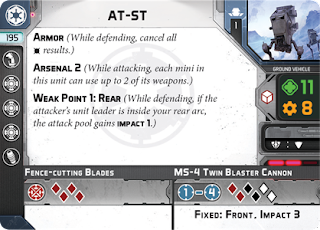 An AT-ST costs 195 points before upgrades.
With a wound threshold of 11 and a resilience of 8; it can take 11 wounds before it's completely eliminated, but after taking 8 wounds, it receives some form of severe damage.
The AT-ST has Armor and a white defense die and converts surges to blocks, which means it automatically cancels hits and has a 33.3% chance to block the remaining crit results. Weak Point 1: Rear means that if an attacker's unit leader is within the AT-ST's rear arc, then their attack pool gains Impact 1.
The AT-ST moves at Speed 2, though it should be noted that with their larger base they are a bit faster than Speed 2 trooper units.
Arsenal 2 allows the AT-ST to use up to 2 weapons while attacking.

The AT-ST has 2 different weapons and can be upgraded with up to 3 more. The MS-4 Twin Blaster Cannon is quite powerful and has can hit targets from range 1-4, but only if they are in the AT-ST's front arc. With 2 red dice, 2 black dice, and 2 white dice it does an average of 3 damage (including an average of 0.75 crits.)
Its melee Fence-cutting Blades attack has 4 red dice and also averages 3 damage (includes 0.5 crits.)
Statistics of each Hardpoint weapon upgrade are included in the Upgrades section.


The probability distribution for each of the AT-ST's native attacks is shown above (see the Upgrades section for a probability distribution and discussion of the different available Hardpoint weapon upgrades.)
In melee, the AT-ST is quite consistent. Its Fence-cutting Blades have a Most Probable Result of 3 damage at about a 42.2% chance. This attack is actually slightly more likely to result in 3 or more damage (~73.8%) than the MS-4 attack (~67.4%).
Of course, the MS-4 Twin Blaster Cannons attack has a higher max damage of 6, but it also has a Most Probable Result of 3 damage, at about a 34.8% chance. The combination of red and white dice means that while its unlikely to miss entirely, yet it is also rare to get all 6 hits. The vast majority of results, about 83%, will be in the 2-4 damage range. With Impact 3, this one of the better anti-armor weapons in the game.

In these guides I have used the average number of hits required to destroy a unit, which I call "Effective Health Points", as a measure of a unit's survivability. Because the Armor keyword allows the AT-ST to cancel all hit results, and therefore only suffer damage from crit results, I will instead use "Effective Health Points (Armored)" or EHP(A) for short. This is the average number of crits needed to destroy an armored unit. Like EHP it is also calculated by dividing the unit's wound threshold by it's defense die's probability of turning up blank.

An AT-ST is quite tough with 16.5 EHP(A). Its Armor means it is well protected against small arms fire, but keep in mind that Weak Point 1: Rear adds Impact 1 to enemy attacks from behind. At an average 0.5 crits per attack, it would take a standard unit of 4 Rebel Troopers around 33 attacks to destroy an AT-ST when shooting its front or sides vs. 17 attacks when shooting the rear. Even an HH-12 Stormtrooper (which has Impact 3 and averages 1.875 crits against armored units) would only expect to destroy it after 9 attacks (fewer if the rest of the stormtrooper squad manages to contribute some crits as well.)

The AT-ST has 5 upgrade slots: 1 Pilot, 1 Communications, and 3 Hardpoints.

First we'll take a look at the Hardpoint weapons available to the AT-ST. Since Arsenal 2 allows the AT-ST to make attacks with up to 2 different weapons, I would recommend taking at least 1 of these upgrades in order to take full advantage of this perk.

The AT-ST Mortar Launcher (10 pts) is the least expensive of these upgrades and one of the longest ranged weapons in the game. With this equipped you'll be able to shoot at enemies from across the full length of the battlefield. While it has the potential to deal 3 damage, this is quite unlikely (~1.6% chance.) Its inconsistent white dice roll an average of 0.75 damage.
However what it lacks in damage output it makes up for in utility with the Suppressive keyword. This causes the defender to automatically gain a suppression token. (This is in addition to the suppression token that the defender gains if you roll at least 1 hit or crit.) Even if the attack misses (which is pretty likely at a roughly 42% chance) it can still suppress and slow down distant trooper units.

The DW-3 Concussion Grenade Launcher (15 pts) has the shortest range of the AT-ST Hardpoint upgrades, but it is more consistent than the Mortar Launcher, as it misses completely only 25% of the time and has an average of 1 damage. But its best feature is probably Blast, allowing you to ignore any cover your target may have. Attacking an enemy with this and the MS-4 can be devastating, and even Heavy Cover won't save it.

The 88 Twin Light Blaster Cannon (20 pts) is the most expensive of the AT-ST's Hardpoint upgrades, but with an average of 1.5 damage it offers the most raw firepower. It also improves upon the range of the Grenade Launcher, able to hit targets from range 1-3. It has Impact 1, so an attack from this combined with an attack from the MS-4 can deal significant damage to armored targets.

There is currently only one Pilot option available: General Weiss (10 pts). You can exhaust General Weiss to gain Arsenal 2 for the remainder of your activation. Since the AT-ST already has Arsenal 2 and keywords are additive, this means you will have Arsenal 4 and can attack with up to 4 weapons on that turn. Of course, in order to take advantage of this with an AT-ST, you will need to equip at least 2 Hardpoint weapons if not all 3. That means spending around 30% of your points budget on a single unit, so you'd better have a plan to use it effectively.
With such a loadout, General Weiss will allow your AT-ST to have an extra powerful activation. Assuming you have targets in the appropriate ranges, with decent dice rolls you could damage and suppress up to 4 different units. Or alternatively, you might be able to hit 1 nearby enemy unit extra hard, rolling 11 dice against it (3 red, 5 black, 3 white) while still laying down some long-range suppressive fire at another target with the mortar.
Remember that you will need to use a refresh action before you can use General Weiss again. Realistically you may only get 2 or 3 uses from him over the course of a game.

Equipping a Long-Range Comlink (10 pts) will allow you greater tactical flexibility, as you won't have to worry about keeping your AT-ST within range 3 of your commander(s) to issue commands to it. Whether it's worth the points will depend on just how inclined you are to issue orders to your AT-ST while separating it from the rest of your forces. Keep in mind that other upgrades like Battle Meditation or Commanding Presence can achieve a similar effect.

A Comms Jammer (15 pts) can help you disrupt your opponent's plans, as his units will either have to avoid coming too close or face the prospect of being unable to receive orders. Though expensive, this might discourage enemies with dangerous melee or short ranged attacks (i.e. Impact Grenades) from getting too close. It could also make flanking your AT-ST to exploit its weak spot just a little bit riskier. However, in an AT-ST list points are at premium, making an expensive yet only situational upgrade difficult to recommend.
Also keep in mind that this does not prevent commander units like Darth Vader and Luke Skywalker from issue commands to themselves.

Aside from looking awesome, the AT-ST's value comes primarily from its ability to destroy enemy threats and draw fire away from your trooper units.

You should keep your AT-ST close to your infantry so that they can support each other. You can do this by moving into a position where you can cover your trooper units. Once you are in a good spot, aim and fire at whatever you deem to be the greatest threat, moving or pivoting if necessary to stay on target. If the enemy focuses their fire on your AT-ST, your infantry will have a free hand to capture objectives, engage enemy troopers, move to better ground, or anything else that you might want them to do. On the other hand, if the enemy ignores your AT-ST then you can ravage their forces with its powerful weaponry.

With Armor and the highest health in the game, the AT-ST is certainly tough, but far from invincible. It will almost always require a great deal of effort to destroy an AT-ST. You might be surprised at how quickly a determined foe can bring them down with a bit of luck and the right tools.

While powerful Impact weapons can certainly be worrisome, its greatest weakness might actually be Ion weapons, which are currently only available as Heavy Weapon upgrades for trooper units. You don't want to spend 195+ points on an AT-ST only to have it standing uselessly in the middle of the battlefield, unable to act because it keeps getting ionized.

If you do find yourself facing units with Ion weapons, suppressing and destroying these should be a priority. Once again, keeping your own infantry nearby is important as they can help suppress and destroy the anti-armor elements of your opponent's army. They can also help if enemy units have slipped around behind your AT-ST to attack its weak point.

Whatever else you bring to the table, the AT-ST is likely to be one of your most dangerous units. Use it to instill fear in your enemies and quickly wipe critical units from the field.